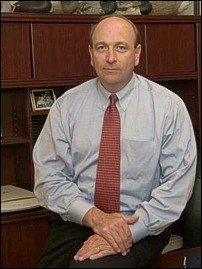 Marc Finlayson founded Finlayson Consulting, LLC at the beginning of 2003 to take advantage of his more than 25 years experience in various disciplines of public affairs work including: public relations; legislative and regulatory affairs; news media relations; community relations; association management; advertising and marketing; and philanthropy. He works with clients in the private sector, as well as not-for-profit community and regional organizations, including his principal clients the Highway 17 Association and Carolinas Concrete Pipe & Products Association, Inc. Finlayson Consulting contracts with both organizations to provide management and financial services and government affairs coordination, overseeing staff and subcontractor resources.

Prior to launching his company, Finlayson served as Weyerhaeuser’s North Carolina Communications Manager. In this role he was responsible for news media relations, crisis management and corporate image advertising for all of Weyerhaeuser’s forestry and manufacturing operations in the state. Working with regional advertising agency partners, he earned recognition for the company for outstanding corporate advertising, including three Clio awards. He also administered the Weyerhaeuser Company Foundation in North Carolina as part of an overall community relations responsibility.

Before moving to New Bern with Weyerhaeuser, Finlayson was Government Affairs Manager for the North Carolina Textile Manufacturers Association in Raleigh. In that capacity, he represented the interests of the association’s member companies on legislative and regulatory affairs. During 1989-90, his final legislative session representing NCTMA, Finlayson was recognized as one of North Carolina’s 40 most influential lobbyists by the NC Center for Public Policy Research.

Through his work with the Highway 17 Association, Finlayson was asked to co-chair NC Go!, the statewide transportation advocacy coalition. In this role, Finlayson speaks for improvements to all transportation systems in the state, including highways, public transit and ports. He has addressed many groups interested in transportation policy and funding including the NC Board of Transportation; the NC Logistics Task Force; the 21st Century Transportation Committee; and the Charlotte Chamber of Commerce among others.

Finlayson has been active with many other educational, civic and charitable groups across the region and state. He served on the Board of Visitors of the Carolina Environmental Program and the Advisory Board of the Center for Sustainable Enterprise, both at the University of North Carolina at Chapel Hill. He was a founding Director of the Partnership for the Sounds, an organization promoting sustainable economic development and environmental education for Northeastern North Carolina. He is an elder in the First Presbyterian Church of New Bern and supports many other civic organizations in Craven County.

Finlayson earned a Bachelor of Arts degree in News/Editorial Journalism from the School of Journalism and Mass Communications at the University of North Carolina at Chapel Hill. He began his career as a broadcast journalist with small commercial television stations in Virginia and North Carolina before joining UNC Public Television as reporter, producer and host of Stateline and Legislative Report. He covered government, politics and public policy during four years with UNC-TV.

He lives in New Bern with his wife Lydia and their three children.